Eisert became the first woman or minority to become picture editor of a major U.S. newspaper, one that also consistently ranked among the top three newspapers in the country.  Quickly, and without permission, Eisert transformed the task of creating a daily picture page into a role that, except for budgeting, would later become a model for the role of Assistant Managing Editor for Graphics – handing anything and everything visual from the usual assigning, editing, cropping and placement, and then expanding to include broad use of the art department (including generating some of the first newspaper informational graphics) and creating page designs, directing special sections and leveraging page display. Eisert was privileged to work with what many then would consider to be the best photographic staff in the country, including adding two amazing women to this top-ranked photography staff, a staff which then had it’s own aerial photographer, its own mobile lab, two studios, two darkrooms and automatic processing equipment. When Eisert started in Louisville, there was only one woman in her newsroom, one who diligently worked at the copy desk, who never looked up from her work or took a break in all the time Eisert was there. Copy desk colleagues confirmed that they never saw her chat with anyone, take a lunch break, do anything but move her copy pencil. So Eisert realized that she was alone and that how she comported herself would either open doors for others behind her or slam them tighter. On her first day on the job, Eisert walked up to the news editor Jack Carey who looked up disdainfully over his half-frame glasses to firmly point out that he had “been in THIS job longer” than she’d been alive. She admits that she did look like she’d just escaped from junior high, so she realized the challenge she had to meet. By the end of her tour there, Carey was her biggest fan. 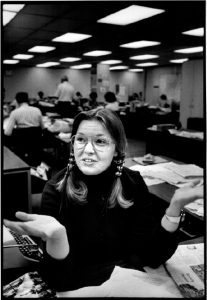 Sandra in the newsroom at the Louisville Picture Desk not all that long before leaving for The White House. By this time one additional woman had appeared in the newsroom and Sandra had already completed two of her earliest books and transformed the visual approach of the